“When a war breaks out, we women suffer the most. Especially young women, pregnant mothers and newborns suffer more than others. Now is a very difficult time for them.” – Nang Aye Aung (KWO) 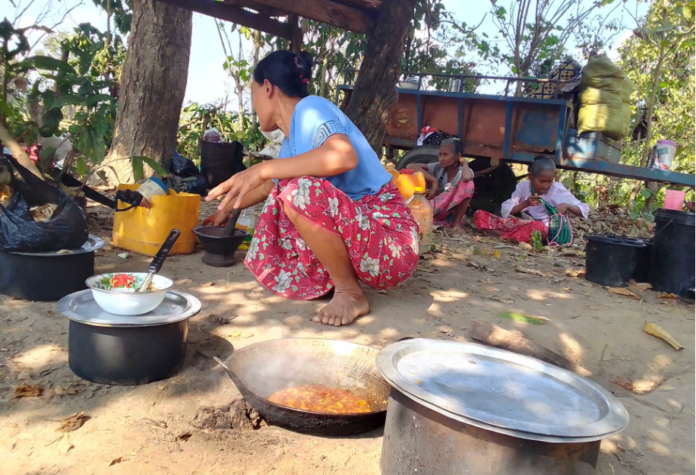 An interview with Nang Aye Aung, a member of the Karen Women’s Organization (KWO)

Among those displaced are women and children. Nang Aye Aung, a member of the Karen Women’s Organization (KWO), which supports the displaced, was interviewed to learn more about the current difficulties they face during the conflict.

Q: First, please tell me about the difficulties and hardships faced by the displaced women?

A: Regarding the southern part of Kawkareik Township, I’d like to highlight the situation of women there. When a war breaks out, we women suffer the most. Especially young women, pregnant mothers and new-borns suffer more than others. Now is a very difficult time for them. The regime’s forces have launched offensives in the southern part of the township, our area, since November, December and January. Some houses were set on fire during the offensives. The fighting was fierce. They carried out air raids and houses were set on fire. Among the houses that were burned down during the attack, there could be widows as well as married couples. But families with a husband can at least make a makeshift shelter. For widows, it’s difficult to get the necessary wood or bamboo for construction. Since it’s not even safe for them to enter the village, they face many more difficulties.

Q: Secondly, what kind of support do the women receive and how should we support them?

Q: How many displaced women are there in the Kawkareik area and what are their main needs? What are their concerns?

A: We don’t have an estimated number of displaced women in the southern part of Kawkareik. Among them are pregnant women and children. We don’t have a thoroughly collected list, but it may be thousands of them. We should think about supporting their basic needs such as food, shelter and clothing. They’re very distressed because they lost their property and livestock. Their livelihood is most important. Financially, we have no way to earn money here. Some of them can’t even harvest their crops because of the fighting. So they have a lot of difficulties to make a living. With the current commodity prices, they can’t even buy food. Unmarried women have even greater difficulties.

Q: Can you tell me in which villages all these thousands of displaced women live in the southern part of Kawkareik?

A: I’d like to name them by thier village tracts that have been affected by the war since 2021. Maungma village tract is the most affected. There are many internally displaced persons (IDPs) in these five village tracts of Maungma, Hpawtnwe, Anhpagyi, Ywartanshey, and Hsakahwet. These women face human rights violations everywhere. As an organization, the situation doesn’t allow us to examine them on the ground. They’re mainly subjected to psychological abuse. And despite the presence of various organizations in the area, physical abuse can also occur.

Q: What physical and psychological difficulties will the women and children face if the war continues?

A: First and foremost, their livelihoods and children’s mental health will be affected if the war continues. Vaccines are needed for newborns. Some of them won’t be vaccinated. There have been cases where women have had to flee to other villages to give birth. The women here cannot live in their own house. They have to live in the forests. It’s not always convenient to seek shelter in other villages. As far as we have learned, some villagers from Kawtnwet village have to live on their farmland and make a living accordingly. Especially their health condition will deteriorate. The children are psychologically affected by the war. At the moment, many of them feel desperate.

Q: How difficult is life for women in the midst of conflict?

A: In the midst of ongoing conflict, it’s difficult for us women, but it’s even more difficult for some of those who are the head of the family. There are families where the husband cannot work for health reasons because he has passed away or suffers from a chronic illness, and their wives live from hand to mouth. They have no way out. They can’t go to work somewhere else. So their livelihood is very difficult indeed. In addition, they’re also psychologically damaged, which is difficult to cure. If we don’t go and give them psychological support, their health may deteriorate again. Whether it’s an international organization or not, I’d ask that it prioritize and help women. In times of displacement due to war, pregnant mothers are especially unfortunate. Some of them are about to give birth but are still on the run. Some women have had to give birth on the streets.

We support them as much as we can. We want to support them even more. Some social support groups from the southern part of Kawkareik sometimes come to support them financially. The Committee for Internally Displaced Karen People (CIDKP) also supports them, not only the women but also other displaced people in the area.

Q: What else would you like to say about the displaced women?

A: As a member of KWO, I’d like to ask the international organizations to prioritize helping our Karen people, especially the displaced women in the southern part of Kawkareik, including pregnant women and children.

As I said earlier, they’re in urgent need of medical assistance. They’re still fleeing now in winter and some of them don’t even have a blanket. Some of them were already living in poor conditions before they were forced to flee their own villages. So after fleeing to other villages, they face even more difficulties without money.

At this point, our emergency support groups can only help people who are within our reach. There may be other places that we can’t reach. I’d also like to add that the health of women and children should be a priority.

“The Myanmar Army blames its defeat on the people and is ethnically attacking the people of Arakan.” U Khaing Thukha (Spokesperson, ULA/AA)

“The army does not have a lot of military strength. A platoon has around 20 members. Two members were left in our battalion when...

“We’ll inevitably have to fight the PNO if it joins forces with the military council. We can also confront them militarily if they stand...