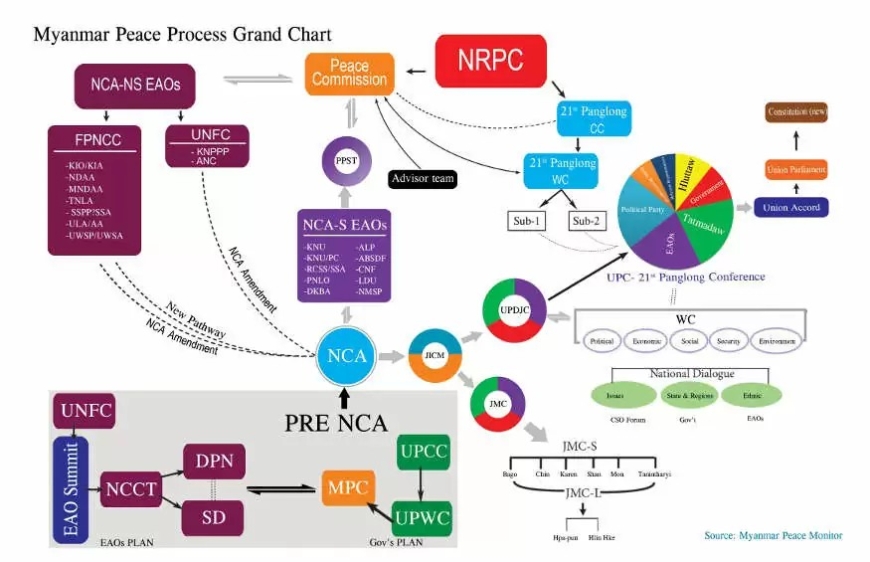 The peace process, which began in 2011 and ended almost a decade later, 2020, produced three components under the Union Accord. However, the peace process is believed to have stalled due to the military coup by military chief Min Aung Hlaing. It can be said that the role of the Tatmadaw (the military) in the peace process, which has faced many obstacles, has been more significant than that of successive governments and ethnic armed groups.
This is because the governments and ethnic armed organisations had to grant Min Aung Hlaing’s military representatives decision-making powers in each group under the Nationwide Ceasefire Agreement (NCA). A look at the speeches of the government leaders, the Tatmadaw, and the ethnic armed organisations at the last Union Peace Conference – 21st Century Panglong shows how Min Aung Hlaing and the coup regime stand on peace.
Min Aung Hlaing and Tatmadaw representatives worked closely with U Thein Sein’s government in the peace process. However, the Tatamdaw distanced itself from cooperation with the NLD government, and acted on its own. Therefore, some ethnic leaders even expressed their concern that this posed a great challenge for them to follow a path of peace through dialogue.

On November 9th, Min Aung Hlaing and his junta formed their own peace committee. They renamed it the National Solidarity and Peace Negotiation Committee (NSPNC), headed by Lieutenant General Yar Pyae, who was a military member of parliament under the NLD-led government. As chairperson of the NSPNC, Lt-Gen Yar Pyae has tried to reach out to the EAOs of the Federal Political Negotiation Consultative Committee (FPNCC). The United Wa State Army (UWSA), has not signed the NCA, and no significant progress has been made in reversing this. Instead, fighting continues between the Tatmadaw and FNCC members, the Kachin Independence Organisation/Kachin Independence Army (KIO/KIA), the Myanmar National Democratic Alliance Army (MNDAA), the Ta’ang National Liberation Army (TNLA), and the United League of Arakan/Arakan Army (ULA/AA). The peace process with the ethnic armed groups that signed the NCA has stalled as formal PPST talks have been suspended. Heavy fighting is taking place between the Tatmadaw and the KNU, which is arguably the strongest of the ethnic armed groups that has signed the NCA. Clashes are also taking place between the regime’s armed forces and other signatories to the NCA, such as the Chin National Front (CNF), the Democratic Karen Benevolent Army (DKBA), the Restoration Council of Shan State/ Shan State Army (RCSS/SSA), and the Karenni National Progressive Party (KNPP) in Karenni (Kayah) State.

The National Unity Consultative Council (NUCC) which emerged from the Spring Revolution, includes no less than eight ethnic armed organisations, including the KNU, the KNPP and the CNF. Other EAOs, such as the AA, has been invited to join the NUCC. The NUCC is composed of groups and forces such as anti-coup strike committees, sectoral organisations, women groups, and elected MPs. It works towards the creation of a federal democratic union. Daw Zin Mar Aung, Foreign Minister of the National United Government (NUG), is trying to form an alliance relations committee under her leadership.

The direction of the peace process depends on the leadership abilities of the junta and the NUCC. At present, the NUCC may need more support from the ethnic armed organisations, but compared to the junta, the NUCC and the NUG have received the support of the Spring Revolution forces and the people.

It remains to be seen whether the direction of the peace process is in the hands of the junta, or the NUCC and the NUG. The ultimate goal of internal peace is directly related to the victory of the Spring Revolution, which the creation of a federal democratic union that guarantees self-determination and equality.