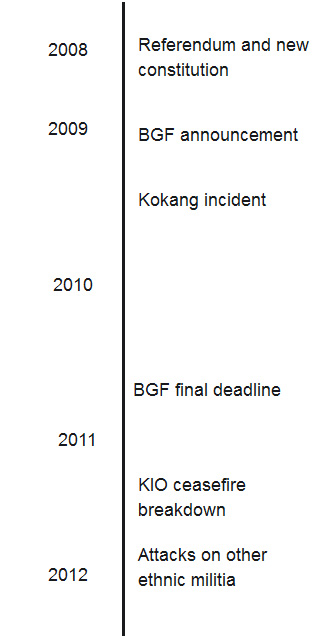 In April 2009, the government announced all ceasefire groups to transform into “Border Guard Forces” (BGFs) as stipulated in the 2008 constitution. These required all militia groups to come under the partial command of the Myanmar military.

According to the government’s plan, each unit would be made up of 326 personnel. Of these, 30 would be from the Myanmar army, including one of the three majors in charge of the unit. It was indicated that all members of the force would draw regular army salaries from the date they commenced training. Those who were over the statutory retirement age of 50 would have to retire.

None of the major ceasefire groups – with  the exception of the Democratic Kayin Buddhist Army (DKBA) – agreed. The deadline to complete the transformation of ceasefire groups was repeatedly postponed until 1 September 2010, after which the government declared the post-1990 ceasefire agreements “null and void”. The state media then began referring to these groups as “insurgents”. It took particularly hostile measures against the KIO by ordering the closure of KIO liaison offices and refusing to register Kachin political parties.

The ceasefire groups that were holding out came under increasing government pressure.

Economic pressure was stepped up as the military government blocked Chinese border trade through the KIO’s Laiza headquarters, a crucial source of income for the group. The authorities also ordered the closure of all but two of the KIO liaison offices in government controlled areas. Pressure was put on the Wa, with the Myanmar aviation authority refusing to renew the operating licence of Yangon Airways, a domestic carrier owned by a relative of the UWSA chairman.

The government also began to step up its military pressure on militia groups. The attack on the small Kokang militia group, MNDAA and successful capture of their base in Laogai, Shan State on August 2009 was the first military strategy to enforce the BGF plan. Although the government officially claimed the attack was part of a drug-busting operation, many saw it as a test and warning to other militia groups. The event marked the first ceasefire breakdown after the 2008 referendum and the resumption of civil war in Kachin and Shan state.

The buildup of military pressure on the KIO came to a head on 9 June 2011, with clashes between government troops and the strategic KIO outpost of Bumsen in Kachin State – close to the site of two Chinese-operated hydroelectric dams at Tarpein. The Myanmar army overran the outpost on 12 June, and when it ignored a KIO deadline to withdraw, the KIO responded by destroying a number of bridges in the area to hamper the resupply of government forces. Since then, there have been regular clashes in several parts of the Kachin and northern Shan states.

Despite the government’s significant achievements with the new three phase peace plan and temporary shelving of the BGF issue, militia groups have claimed the military has continued to attack or position their troops close to their bases. Such contradictions in the government’s peace strategy continues to fuel ethnic skepticism and doubt over the government’s true motives in the peace talks.